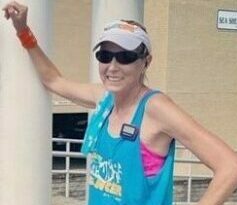 In May of 2010, Gina was diagnosed with chronic myeloid leukemia. For a while, she was able to manage her cancer with medication for treatment. Things were pretty stable for a while until 2013.

In December 2013, Gina was preparing some Christmas cookies for her family’s holiday celebrations when she burned her hand. She noticed that it wasn’t healing and went to her doctor. Her doctor gave her the option to receive antibiotics now or get them infused at the hospital. Gina decided to go to the hospital, wanting to feel better as soon as possible to be able to celebrate Christmas with her family. After a 5 hour wait in the ER, she began to feel worse. She had a fever, her white blood count cells were extremely high, and she became septic. Gina was given a blood transfusion before being transferred to Penn Medicine. She learned that her cancer had transfigured into acute lymphoblastic leukemia.

The cancer was so aggressive that she was told she might not live to the end of the year. “I knew I was sick, but I didn’t think I was that sick,” she said. She was in the hospital for 29 days before going home in January. She went back to the hospital to get chemotherapy and stayed there for a series of days

to be monitored because of how aggressive the treatment was.

Gina’s path crossed with Bringing Hope Home (BHH) when she started chemotherapy. BHH was able to help her and her family pay their gas, electric, cable, and cell phone bills through the Light of Hope Family Grant in 2014.

“It was so surprising that there was an organization that existed to take a little bit of the stress off of the cost of living. You don’t think about the other expenses outside of medications or hospital stays,” she said.

After seeing a flyer for BHH’s Sea Isle City STOMPS Cancer 5k at the BHH HOPE Family Reunion in 2015, she took it back to her physical therapist and asked her if it was possible for her to participate. Gina was working to bring back her strength and decided to take a chance and signed up. She said the energy and support from Hope Nation on that day made her think: “I can do this.” Gina successfully finished her first ever Sea Isle City STOMPS 5k!

Where Gina is today

She remains a regular runner to this day and has participated in the Broad Street Run, which is a 10 mile race in Philadelphia. She looks forward to participating in the Sea Isle City STOMPS Cancer 5k every year. “I run because it gives me a goal to work towards,” she said.

When asked what message she would share with others currently battling cancer, Gina says: “Don’t accept being a ‘cancer patient’ — I am a person that has cancer. I’m not a statistic.”