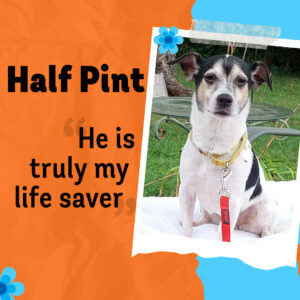 Beverly, a nurse of 44 years, was diagnosed with cancer in 2021 and it’s a story like no other. It all started when she adopted a new dog, Half Pint. Beverly was an animal lover through and through. After having to put down her previous dog of 18 years, she welcomed Half Pint with open arms. Little did she know, there was more to Half Pint than puppy cuddles and slobbery kisses.

Half Pint had a little bit of a smell to him when Beverly first brought him home; not necessarily out of the ordinary when adopting a new dog and not even a concern at the beginning. Around the same time, Beverly started to develop a cough. She did not think anything of it and just assumed it was because of the new dog. Bathing may have fixed the smell, but it did not fix Beverly’s coughing. After the smell got resolved and her issues did not, she started to believe that she may have been allergic to Half Pint.

“He is truly my lifesaver.”

This visit to her physician led to her diagnosis. It was a tough pill to swallow, but when is a diagnosis like that ever easy? Beverly had no other symptoms other than the coughing, and even that had only started when she had adopted her new dog. She just thought that she was having some sort of reaction to having him in the house and never would have imagined that it could be something more serious.

Thanks to Half Pint, Beverly was able to get diagnosed and get the treatment that she needed moving forward. We all know the saying “who rescued who?” when talking about adopting a furry family member, but Beverly and Half Pint take that to a whole different level. She rescued him by giving him a home and a family, but he rescued her by literally saving her life.

At the beginning of the new year, Bringing Hope Home was able to help Beverly and Half Pint with some household bills through the Light of Hope Family Grant. They wanted to show their appreciation for the support by sharing their heartwarming story. We are forever grateful to hear the story of how Beverly had been saved by cute, little Half Pint.