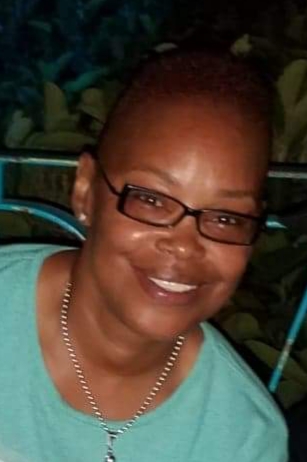 Throughout her journey with cancer, Felicia’s mantra has been, “Just keep it moving.” Diagnosed with pancreatic cancer in 2010, Felicia’s story includes two decades of work in healthcare, a strong support system built by her wife of eighteen years and her mother, one son, six grandchildren, and two cancer diagnoses. When not working or going to doctor’s appointments, she loves to travel and dance. Clearly, Felicia is a woman who does not allow her diagnoses to define her.

While approaching the end of her battle with pancreatic cancer, Felicia’s life changed on March 30th when she passed out upon receiving her second COVID-19 vaccination. Felicia’s doctor instructed her to immediately head to the emergency room, where medical professionals informed Felicia that they had located masses in her upper right lung. After a ten year fight with pancreatic cancer, Felicia was bombarded with the news that her fight may not be over.

Following a stressful period of time that included a PET scan that indicated active cells and a biopsy that suggested negative results, Felicia went into surgery on May 24th to finally obtain an answer regarding the masses in her lung. Felicia and her surgeon agreed that if cancer was found during the surgery, the doctor would remove the entire upper right lung. Ultimately, she woke up from surgery with a long road of recovery and treatment for stage 3B cancer ahead of her.

At the present, Felicia is undergoing chemotherapy and adjusting to the challenges of interacting with the world around her in the midst of the COVID-19 pandemic. Though she feels so accustomed to working, visiting her grandchildren, and “keeping it moving”, she worries about her status as an immunocompromised individual. For the most part, Felicia tries her best to prioritize her emotional, spiritual, and mental health throughout her treatment. In her own words, “Not everyone is built for this.” Sometimes, she has what she calls “medical breakdowns,” or times when she feels overwhelmed, exhausted, and isolative. After ten years of dealing with these moments, she feels more confident in her ability to understand when she needs time to herself. As she expressed during her interview, “It’s not always rainbows and butterflies.”

However, Felicia never allows her situation to undermine her positive spirit. She describes herself as really grateful right now for the simple things in life, like waking up in the morning. She is also grateful for the support systems that surround her during this time, including her social worker, Gabby, and organizations like Bringing Hope Home. Throughout a time of such uncertainty, the Light of Hope Family Grant that Felicia received from BHH greatly relieved her stress. Though appreciative of the financial assistance, she feels perhaps more thankful for her introduction to Bringing Hope Home.

Following her interactions with the stories of other BHH Families and with members of the BHH Team, Felicia feels strongly that she wants to be a part of this organization. Though she wakes up everyday with lungs that are still healing, four more rounds of chemotherapy, and ten years of check-ups ahead of her, Felicia feels so motivated to use her story to encourage others. Throughout her journey with cancer, she has realized that no one can completely understand what another person is experiencing. Though she knows that she cannot truly empathize with the situations of others, Felicia hopes that her story may provide some encouragement to the BHH community.

Through her story and her uplifting spirit, Felicia inspires all of us at Bringing Hope Home. We are honored to consider her a part of the Bringing Hope Home Family and to be able to share her story. Thank you, Felicia, for your honesty, your wisdom, and your giving heart.